Skip to content
Get Free Standard Shipping on Orders $50+ (U.S. Only)

This product is unavailable

BELLZI® DESIGN: Bellzi® animals are super soft, adorable, and unabashedly cute! Each of our characters are original designs, and are created with an ultra-premium, child-friendly, and high-density plush material for maximum softness, weight, and quality!

The only kind of “bandit” that should exist would be this cutie pie! My heart was stolen by this little one’s “mugshot” and I’m totally fine with that! I just couldn’t resist her cuteness. I might name her Masquereign or Rockette. I’m not sure yet. I looked up the name, Tanuki, and saw it meant raccoon dog, I think? In Japanese lore it’s an enemy or maybe it was a relative of the kitsune or something rather… I don’t know.

Edit: After a little bit more research I learned that, Tanuki, is not a relative of a raccoon at all. It’s more closely related to a dog, fox or wolves aka other species, branches or lineages of “canids/dogs” if you want to be a bit more scientifically accurate… Anyway… I still love this little one despite the pictures of Tanuki from Japanese folklore was creepy and a bit weird. Masquereign seems to be good for a girl, right?

PS: I’ve decided to call her, Scout. Scout, was the nickname of the little girl in the book, To Kill A Mockingbird, if I’m not mistaken. So I figured I’d go with that name. I always name shiny Sentrets and Zigzagoons I catch in different generations of the Pokémon games Scout. So Scout it is. It appears she’s gotten a bad case of jet lag. Having to spend 7 hours in my locker at work probably didn’t help the poor dear. And to top off the jet lag there’s the boredom too. I would have liked to have been able carried her around by tucking her into my apron from the neck down but her head was a bit too big. 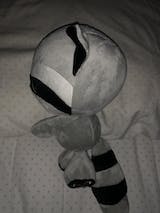